Rendering refers to the processing of waste animal tissue into usable materials. Often this means rendering whole animal fatty tissue into purified fats like tallow or lard. This process can be done on an industrial, farm, or even a kitchen scale.

While the majority of tissue processed comes from slaughterhouses, it can also include expired meat from grocery stores, restaurant grease, and butcher shop trimmings. The material might include fatty tissue, bones, and offal, as well as entire carcasses of animals that have died on farms or in transit, or those condemned at slaughterhouses. Beef, pork, poultry, and sheep are the most common animal sources in rendering operations. Sometimes rendering plants also process materials such as slaughterhouse blood, hair and feathers.

The rendering process dries the material while separating the fat from the bone and protein, yielding a fat commodity such as yellow grease, choice white grease, bleachable fancy tallow, among others, as well as a protein meal such as poultry byproduct meal, meat and bone meal, and others. The process can vary in many ways, often depending on the desired output.

The quality of the input material and the processing equipment and methods will affect whether the end products are used as human or animal food. The material can be processed either by wet or dry process. During a wet process, steam or boiling water is added to the material being processed, causing the fat to separate to a floating phase. During a dry process, fat is released by having the raw material undergo a dehydration process.

Other options that cause the process to vary are temperature range, which may be low or high depending on the application. Operations also vary by batch size – which is sometimes a continuous process and sometimes done in batches.

Rendering can be done for edible or inedible products. The process and materials vary depending on which is being done. Often, materials will not be suitable for human food for either sanitary or aesthetic reasons. These often become the raw material used for inedible rendering. This material is typically rendered using the dry method either in a continuous process or a batch. After the material is heated in a steam vessel which, it will be ground before being heated to remove the moisture and removes the fat from the fat cells before more fat is pressed out of the solids. These solids are referred to as cracklings, which are ground further to make bone and meat meal. Sometimes, plants take a variable approach to dry processing, which includes finely chopping the material before liquidizing it with hot fat before evaporating the mixture. Other inedible rendering is done using a wet process, which is generally a continuous process that uses some of the same steps as the dry. This can include heating the material by steam before pressing to remove the fat and water mixture that is separated further into water, fat, and fine solids by evaporation or centrifuging stages. At that point it is often pressed and dried into ground meat and bone meal.

While most rendering plants only process inedible products, there does remain a process for edible products as well. Rendering processes for edible products are typically meat processing actions that create lard or edible tallow for use in food products. This process is almost always done in a low temperature, continuous process that consists of chopping the edible fat materials and heating them with or without steam before undergoing additional stages of centrifugal separation. This step separates the liquid and fat from the solids and the fat further from the water as well. Depending on the original materials, the finished separated fat can be used in pet or human food products, or even to be used in soap making processes. Franklin Miller size reduction processors can help with all your processing and rendering needs from our TASKMASTER® shredders and their role in successful animal waste shredding to our DELUMPER® crushers’ role in the overall rendering process. Our broad line of equipment can handle a variety of processes and material types. The TASKMASTER® TM8500 twin shaft industrial shredder is the smallest in the TASKMASTER line of industrial shredders. It features an 8.5” wide cutting chamber up to 60” long and a direct drive. These units feature fully-sealed housing, mechanical shaft seals and patented 5, 7 or 11 tooth. These versatile units are available for gravity feed, open channels or inline service with flanges. The geometry of this dual-shaft cutter also provides excellent feeding characteristics for a variety of solids. TASKMASTER cutters are precision manufactured to exacting standards to provide optimal shredding and long life. Each TASKMASTER shredder is heavily constructed for low deflection or vibration and quiet operation and features our patented Cutter Cartridge® Technology.

The TASKMASTER® TM1600 industrial shredder is a powerful workhorse that can shred heavy solids in both gravity and liquid systems. This unit can be installed horizontally with a stand, or vertically with a hopper for channel or pipeline applications with flange adapters.

DELUMPER® lump breakers and crushers break solids, lumps and agglomerates down to desired size with a once-through, non-churning, crushing action that produces minimal fines. They can reduce plant downtime, increase processing speed and improve product consistency. These units are precision manufactured and aligned for smooth operation with low vibration or noise. DELUMPER Lump Breakers can handle wet, sticky, dry, hard or soft substances. It tears through chemicals, lumps, agglomerates, ore, filter cake, ash, sugar, food, plastics and more. The units are available in various sizes with single, dual or triple shaft configurations for capacities up to 1000 tons per hour. DELUMPER lump breakers are used in a wide variety of orientations. Our units can handle dry or wet applications in either in-line or gravity configurations. These powerful units can be customized to meet the requirements of your operation and configuration. 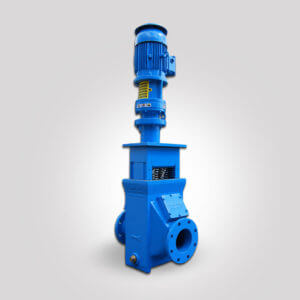 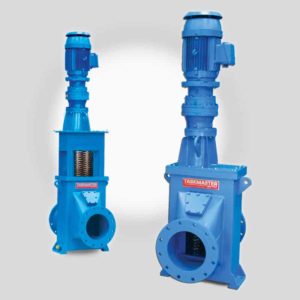 Interested In Learning More About Our  Shredders and Delumpers?